White Flowered Yarrow is a perennial that grows about half a metre tall. The white, sweet-scented flowers attract hoverflies, ladybirds and caterpillar-parasitic wasps. Scent of the feathery foliage repels ants, mosquitoes, ticks and certain species of beetles and flies. 12-15 months to flowering. Approximately 1000 seeds per packet. 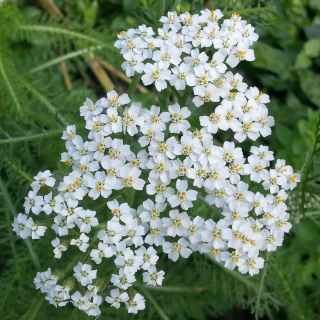 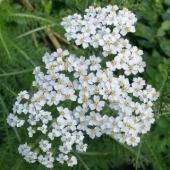 Yarrow is a flowering perennial that grows to about half a metre tall and produces clusters of small white daisy flowers.  Yarrow has a wide natural distribution being native to parts of Europe, Northern Asia and North America.

The leaves of Yarrow can be eaten as a cooked leafy green like spinach or dried and used as a herb, they have a sweet flavour with a hint of bitterness.  Yarrow leaves were a commonly eaten vegetable during the 17th Century due to their wide distribution and ease of growth.  The sap of Yarrow can cause skin reactions in people who are allergic to it, these reactions increase the skins photosensitivity and cause severe burning on exposure to sunlight.  The severity of the reaction is more intense when yarrow sap combines with the sap from grasses as may occur when mowing the lawn where Yarrow seedlings have become weedy and invaded it so take care.  Various preparations of Yarrow leaf have been used in traditional Native American, Chinese and classical Greek herbal medicines to treat a wide range of ailments including sore throats, colds, nosebleeds, other bleeding, stomachache, toothache and other pains.  Yarrow is used in biodynamic preparations as a compost heap activator where it provides minerals and helps to speed up the decomposition process.  Yarrow makes a good companion plant for most other garden species and is a particularly good companion plant to blueberries, it helps to repel many insect pests.  Yarrow is good to plant around culinary herbs as it is thought to increase the production of essential oils in neighbouring plants resulting in more flavourful and pest-resistant herbs.  Interestingly enough some species of wild birds use Yarrow where it occurs naturally to line their nests and it's thought that they do this to help to inhibit the growth of parasites, the parasite load found in nests lined with Yarrow has been recorded as being lower than in nests built by species that don't utilise Yarrow.  Yarrow flowers attract a wide range of beneficial insect predators to the garden including ladybugs, predatory wasps, predatory damsel bugs, green lacewings and hoverflies, the larvae of which are excellent aphid predators.

Yarrow grows best in a full sun location but is also tolerant of light shade although it may become leggy.  Yarrow prefers growing in free draining soil, dig through lots of organic matter including well-rotted manures, compost or worm castings prior to sowing to improve the soil structure and provide your yarrow seedlings with all the nutrient they need to thrive.  Consider growing Yarrow in raised garden beds with imported soil if you natural soil is too compacted or heavy with clay.  Yarrow is also suitable for growing in pots and other containers.  Yarrow is easy to grow, it isn't a heavy feeder and once established doesn't need any additional fertiliser unless nutrient deficiencies are apparent, in which case you should apply a complete organic fertiliser sparingly.  If conditions are good Yarrow can become weedy and will both rapidly grow into a thick, spreading clump and self-sow through the garden if not kept in check.  Yarrow is drought tolerant once established and only needs occasional watering during prolonged dry spells.  Too much water will cause Yarrow roots to rot.  Mulch around yarrow plants to suppress weed growth and keep their roots cool.  Prune back Yarrow clumps by about a third after flowering to keep them nice and compact.  Yarrow can be successfully propagated by dividing large clumps or striking tip cuttings.  Yarrow grows well in soils of a wide pH range from 5.0 to 8.0, but grows best in neutral soils around pH 7.0.

Yarrow seeds are small and need light to germinate so surface sow them and cover them only very lightly with soil to prevent them drying out too much.  Space or thin Yarrow plants to about 30cm apart to give them plenty of room to grow.

The majority of Yarrow seedlings with emerge 5 to 10 days after sowing.

Yarrow plants take between 12 and 15 months to start flowering consistently.