Radish 'Rat Tailed' is an old Asian heirloom radish cultivar which is grown for its fleshy, mildly pungent edible pods rather than its root. Rat Tail Radish pods are a delicious, spicy alternative to green beans. 7-9 weeks to harvest. Each packet contains 35 seeds. 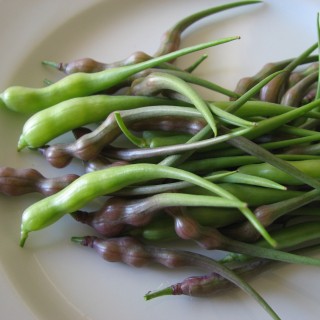 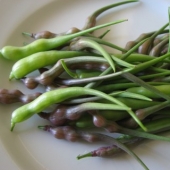 This is an extremely old heirloom variety thought to have been brought to Europe from Eastern Asia.  There are records of the pods from rat-tailed radish being pickled in Europe from the 17th century.

Rat-Tailed Radish is a variety that's grown not for its root but for its edible green pods which are fleshy and can grow up to 15cm long.  Some plants will have plain green pods and others will have purple-tinged pods. The purple-podded plants have attractive flowers with mauve petal tips which fade to white towards the centre of the flower, as well as purple-tinged stems.  Green podded plants have plain green stems and plain white flowers, but they taste just as good.  The flowers are good for attracting pollinators and beneficial insects to the garden, especially hover flies.  The plants are very quick to produce pods.

The pods can be eaten raw out of hand or in salads for a nice pungent bite, similar in taste to raw radish root only milder.  The pods can be pickled too.  If you don't enjoy the spiciness of radish you can briefly cook the pods which will remove most of their bite, you can then use the pods in any recipe you would normally use cooked green beans.  Unfortunately the root of rat-tailed radish plants never expand and cannot be eaten, however the large quantities of pods they produce more than makes up for this.

Sow anytime in cool, temperate and subtropical regions, or from April to July if you live in the tropics.  Sow rat-tailed radish seeds 1cm deep spacing plants about 20cm apart.

Radishes prefer growing in a rich, free-draining soil.  Dig compost through the soil prior to planting if soil is lacking.  Make sure to mulch between plants and water well.  Takes 7-9 weeks to maturity. 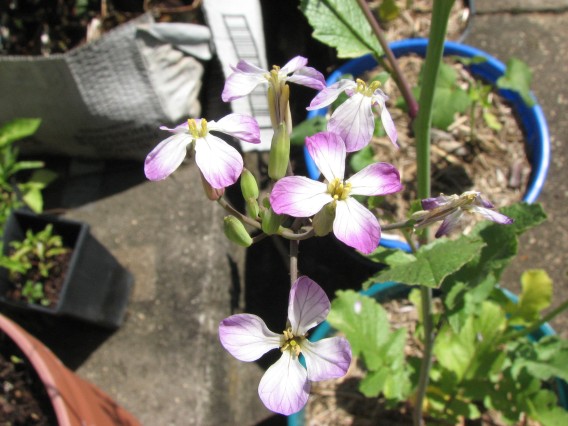 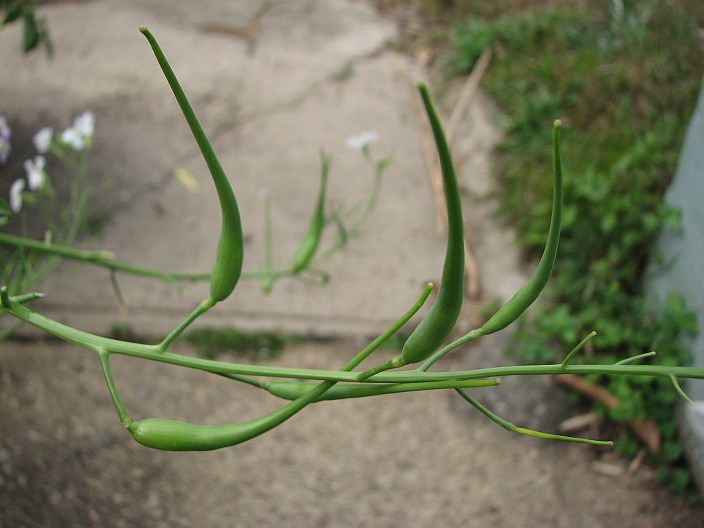 Green rat-tailed radish pods filling out on the stem.