Beams Yellow Pear is a heirloom tomato which produces prolific quantities of small, bright yellow pear-shaped fruits that have a delicious flavour and make great additions to salads. 10 to 12 weeks to harvest. Each packet contains 50 seeds. 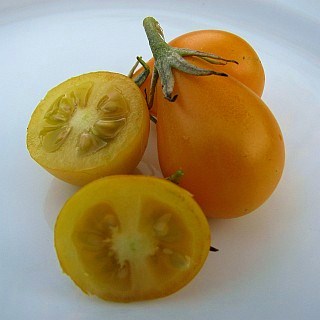 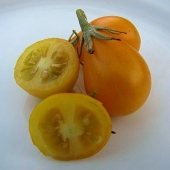 Tomatoes are native to South American.  While yellow pear tomatoes have been recorded being grown as far back as the 17th century, 'Beams Yellow Pear' is a fairly recent heirloom tomato being introduced to seed savers by an Indiana grower in 1983.

'Beams Yellow Pear' tomatoes are great as a colourful addition to salads or just eaten as a snack.  Their firm skin and flesh make these ideal for preserving and bottling too.  Flavour is sweet with a pleasant acidity level, one of the best tasting heirloom yellow pear tomatoes around.

'Beams Yellow Pear' is an indeterminate climbing tomato and grows best when supported on a frame but is otherwise easy to grow.   High yielding, 6-8kg per plant under ideal conditions.  This variety can be grown in pots and on balconies and still provide good yields.  Produces well even in cooler areas of Australia.  Drought resistant.  Grows best in full sun or light shade.

In temperate regions sow from September to November, start indoors if frosts are a problem.  In the subtropics sow from March to September, avoid sowing early if there is chance of frosts in your region.  In tropical regions of Australia sow from May to July.

Expect most tomato seeds to germinate within 7-13 days from sowing, depending on soil temperature.

Your first heirloom yellow pear tomatoes should be ripe and ready to harvest 10 to 11 weeks after sowing, 'Beams Yellow Pear' will continue to produce all throughout the growing season.