Parris Island Cos is a romaine-type heirloom lettuce with wavy green upright leaves and a dense white heart. Flavour is sweet and crisp. Approximately 150 seeds per packet. 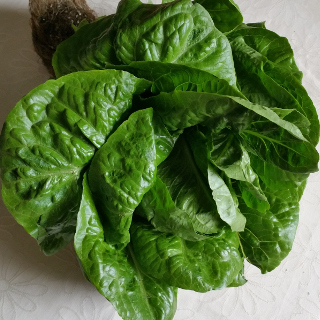 Parris Island cos lettuce was bred in the late 1940's through a combined effort by the United States Department of Agriculture and Clemson University in the state of South Carolina.  The spelling of Parris is correct as it's actually named after Parris Island in South Carolina and not after the capital of France.

The tender, dark-green leaves of Parris Island cos lettuce contain more nutrients and healthy phytochemicals than most other cultivars of lettuce.  Pick leaves when young for best flavour, older leaves are tougher and their flavour can become overpowering to the average palate.  This lettuce cultivar was awarded the Royal Horticultural Societies Award of Garden Merit in 2011.  Parris island cos grows well in warmer climates as it has better bolt resistance than many other cos varieties.

Great shredded in Caesar salads, sandwiches and wraps.  Lettuce can also be eaten as a cooked green vegetable if you have an abundant harvest that needs using up.

Sow Parris Island cos lettuce seeds no more than 4mm deep spacing planting holes about 30cm apart, alternatively you may prefer to surface sow the seeds then mix them through the top layer of soil.  Firm the soil down gently after sowing to ensure good contact with the germinating seeds, doing this extra step will help to prevent the germinating seeds and young seedlings from drying out between watering.  In cold and frosty regions of Australia sow lettuce seeds from September to February, in temperate regions sow any time of year, in the subtropics sow during the cooler months of the year from March to September.  Parris Island cos lettuce is unlikely to grow well in the tropics.  To ensure a continuous harvest sow a few lettuce seeds every week throughout the growing season.

Lettuce should be grown in full sun, although if you live in warmer regions planting in part shade may help reduce heat stress on your lettuce plants and decrease the chance of them bolting to seed.  Lettuce are heavy feeders, be sure to dig lots of organic fertiliser such as well-rotted manure or compost through the growing bed prior to sowing and apply an additional side dressing to plants several weeks after germination.  In Australia lettuce plants require constant water or they'll wilt or bolt to seed, mulch the growing beds with a thick layer of sugar cane mulch or lucerne hay to help retain moisture.   Parris Island cos lettuces take between 7 and 12 weeks to grow to full size, but individual leaves can be picked off earlier than this.